Once your students have located some primary sources, they need to know what to do with them. In this lesson, you will work with your students on analyzing pictures and maps. There are samples that you are welcome to use linked below, or you can use material related to your classroom teaching. The items available below are a political cartoon related to Teddy Roosevelt’s colonial expansion in the Pacific and a map showing Union and Confederate states at the beginning of the Civil War. There is also a photo of MLK, Jr’s “I Have A Dream Speech” from within the Lincoln Memorial.

1.  Knowing: having facts, truths, or principles, as from study or investigation

2.  Inferring:  to derive by reasoning; conclude or judge from premises or evidence

3.  Assuming: to take for granted or without proof

When examining a primary source, guide your students to analyze the source with these three ideas in mind. Let’s consider the political cartoon. 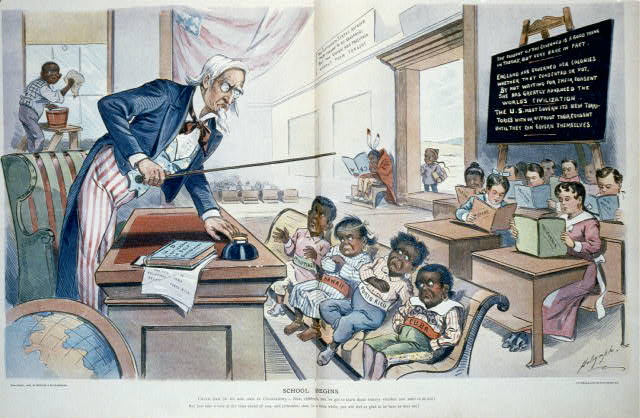 Ask students what they know. What are the facts presented in the cartoon?

(Be sure the answers students give are just facts. They will want to make inferences and assumptions here. Make them stick to the facts. ) Some answers might be “it is a school” (we know this because the caption is “school begins”); an older man in American clothing is teaching (Uncle Sam is an inference); there is an American Flag; the students are separated into groups; the student from the front are from Cuba, Puerto Rico, Hawaii, and the Philippines; the students at the back have books with state names on them; three children are not a part of the school.

Now comes the fun part…some assumptions. Share the caption with your class. It reads

"School Begins. Uncle Sam (to his new class in Civilization): Now, children, you've got to learn these lessons whether you want to or not! But just take a look at the class ahead of you, and remember that, in a little while, you will feel as glad to be here as they are!"

The more knowledge a student has about the era of American imperialism, the better they will be able to make accurate assumptions. Does the class “ahead of them” look thrilled to be there? We can assume from the cartoon that the “American education” that was forced on its colonies was not always wanted. What about the three “outsiders” in the room. We can assume that the student representing Africa is seen as a worker or servant, not deserving of education. The Native American student is in the room, but separate. The Chinese student is not allowed in at all. Lead the students to make some assumptions about the mindset of this era. Ask students to make an assumption about America’s attitude about education (The US felt itself superior to more “primitive” cultures.)

Now, ask your students to think more deeply about the cartoon. Why was it created? To who is it directed? Who created it? When was it created? What location is it about? Asking these questions about the sources they research from will help students analyze their reliability, viewpoint and intended audience.

Alternatively, there is a graphic organizer that uses the acronym SOAPS to analyze primary sources. It is quite self-explanatory. This might be a more appropriate analysis lesson for younger grades.

Now walk through the same process with the map and/or photograph. Lead students to an understanding that what you see in a picture might not always lead to the correct assumption. Students should look for sources that corroborate the inferences and assumptions they have made.

Last week students began identifying primary sources for their topic. Ask them to return to the sources they have found and practice analyzing a map, photo or political cartoon on their subject. They should be able to list the facts, draw some inferences, and make at least one assumption.  Then, ask them where they think they could look to confirm their assumption.

Students should continue working with their primary and secondary sources to take notes. They now have the skill to analyze some of the primary source documents they have found, so they can include this information in their notes.

Next week students should share their analysis of at least one photo, map or cartoon with you for a grade.

"I Have A Dream" from inside the Lincoln Monument

Oops! This site has expired.

If you are the site owner, please renew your premium subscription or contact support.